Posted on February 9, 2013 by oldslowhans

You all know how I love a hike with a “reward” — for example the cliff ruins on Rogers Trough, the panorama dominated by Weavers Needle at Fremont Pass, the petroglyphs at Heiroglyphic Canyon, and the canyon views on the road down to Horse Mesa dam.

Add the Narrows of LaBarge Creek to that list!

Before I get carried away with the description of this excellent hike, I need to point out that it isn’t an easy trip.  It’s more than 11 miles long, and you accumulate a total of over 1,800 feet of elevation gain (and loss) according Dana’s GPS.  Yes, that sounds tough, but pace yourself and even a codger like me can do it.  It’s all “stand up hiking”, not “4-legged” hiking like segments of Picketpost or Flatiron, and the ascents are interspersed with long segments of flat ground to rest your legs.  The usual caution to bring lots of liquid REALLY applies.  Even though it was a coolish day (high 60’s), I went through over a gallon of water and GatorAde.  I’m also compelled to thank the several fellow hikers who hung back to keep this slowpoke company, especially Lin who sheep-dogged me up that last ascent out of Boulder Canyon.  CVHC rocks!

The route we took is a “custom” route stitched together by Jim Hardy, not the “official” route from Canyon Lake trailhead that you’ll find at all the usual published sources.

The first segment of our hike is the familiar route leaving First Water trailhead up to Garden Valley on Lost Dutchman/Second Water trails.  At the Indian ruins where we usually turn north toward Hackberry Springs, or south over Black Mesa, we continued on trail 236 eastward toward a notch in the valley wall. 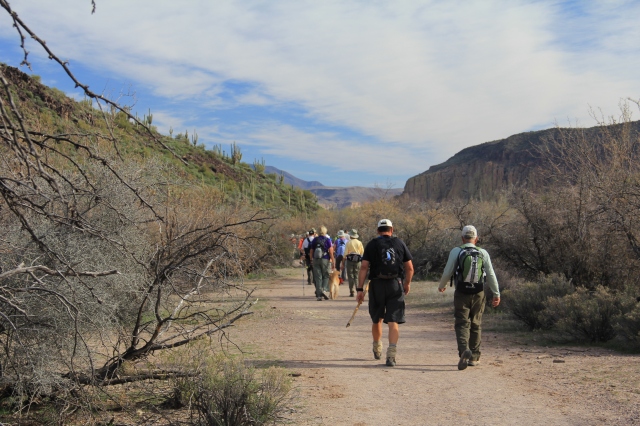 As you leave Garden Valley the trail passes from smooth walking into an area covered with volcanic ejecta, and the footing gets a little gnarly.  Wear strong shoes! 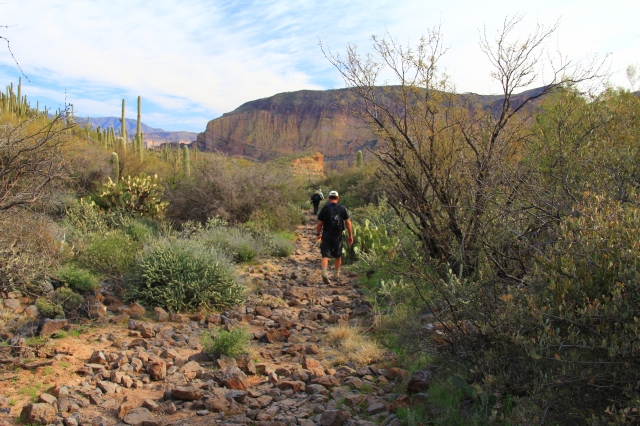 From here the path descends for about a mile down a minor side canyon past Second Water Spring into Boulder Canyon.

At the bottom of this descent we joined the Boulder Canyon trail and headed south along the port side of Battleship Mountain, the formation seen in the right of the photo below. 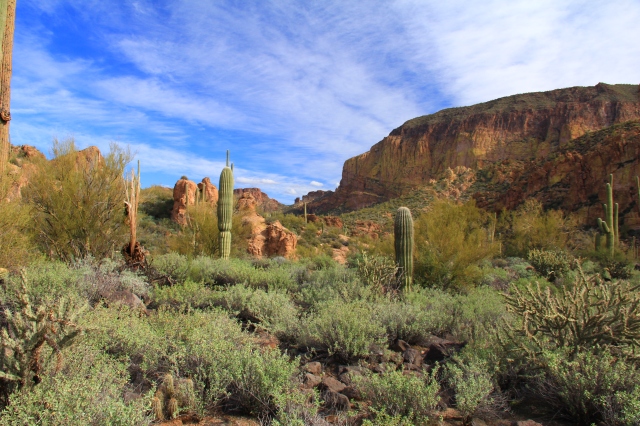 Boulder Creek is carrying a fairly nice flow of water, and during the mile or so that we followed it, we had to cross it 11 times (and 11 times more on the return).  To my knowledge, no  feet got wet.  We are a pretty agile group of old coots! 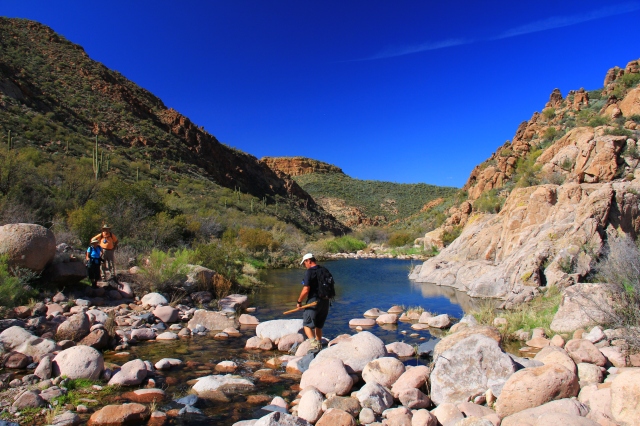 After about a mile we left the trail, took a left turn, and headed cross-country on a rather faint unofficial “use” trail up and over Battleship Mountain just astern of the “ship” on top of the mountain.  The descent on the far side of the mountain dropped us into La Barge Canyon a short distance downstream from the “Narrows”.

Here is a starboard side shot of the “battleship” taken during the descent, with the bow pointing to the right of the picture. 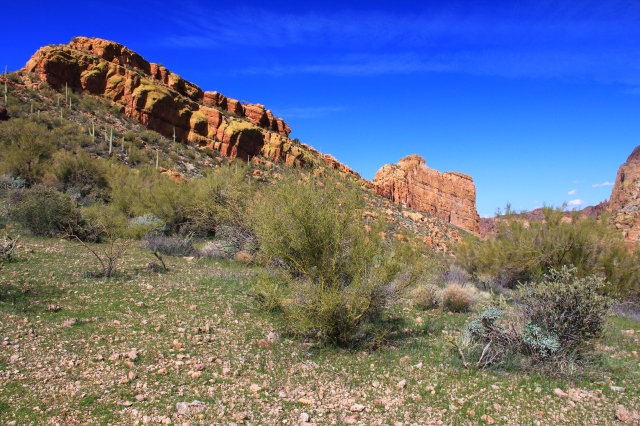 In the next photo, zoomed a bit, you see the bow of the ship on the right, and on the left another sandstone formation named Geronimo’s Head.  The disconnect was carved over the centuries by La Barge creek, seen far below. 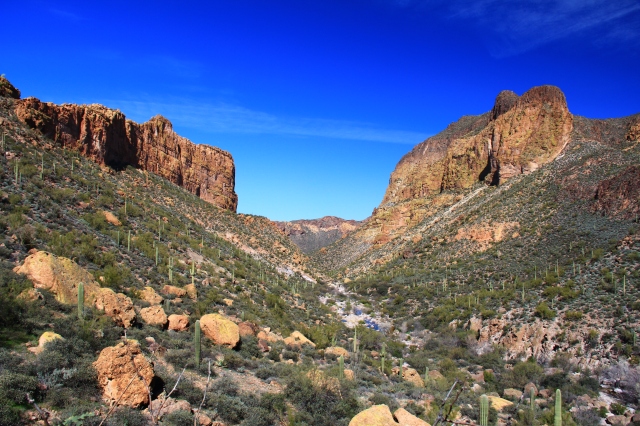 Panning the camera to the right (in the photo below Geronimo’s head is now at the left of the picture) reveals an interesting view of the violent geology of this area.  Embedded in the sandstone of Geronimo’s head is a cone of basalt (the dark rock at the right “foreground” third of the photo).  This is the solidified remains of the interior of a volcano, revealed by erosion from the creek over many hundreds of thousand years. 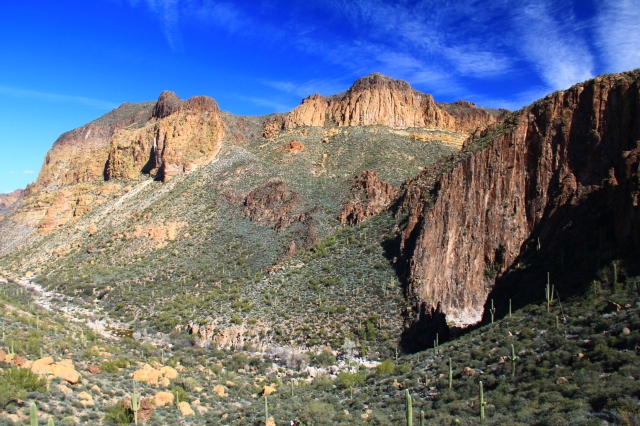 The contrast between the two is quite a bit more striking “in person”.

At the bottom of our descent into La Barge, we found it also contained a good flow of water.  In this pool if you look closely you can see a population of small minnows, indicating a permanent and reliable source of water even in the dry season. (Purify before you drink any wilderness water.) 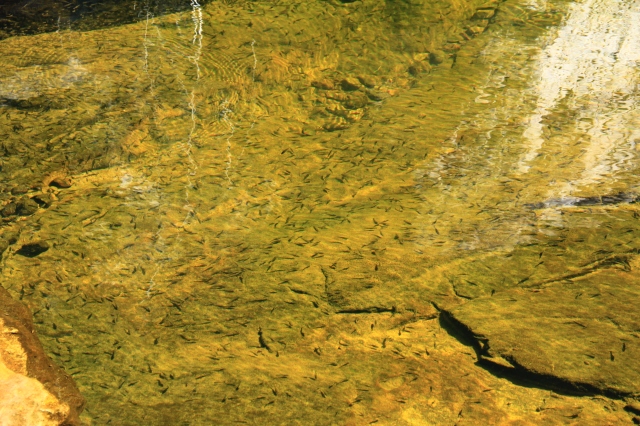 Turning right when you reach La Barge creek, we have arrived at our destination, the “Narrows”.  This is a narrow cleft, with shear vertical walls hundreds of feet high, which the creek has carved through hard rock at the heart of the basalt cone.  Because of mid-day direct sunlight it wasn’t possible with my skillset to get really good photos of this narrow cleft, but hopefully the views below will whet your appetite enough to make the hike to see for yourself. 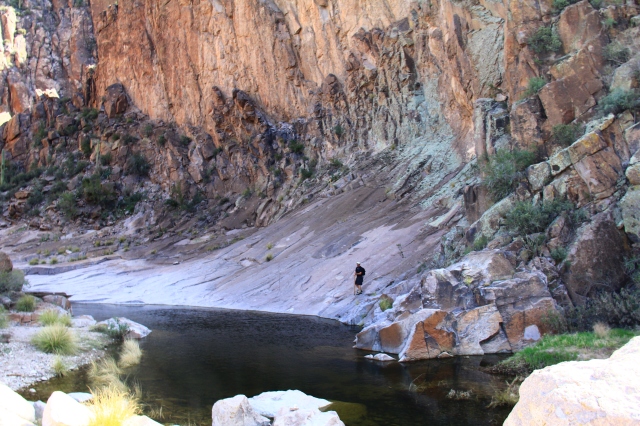 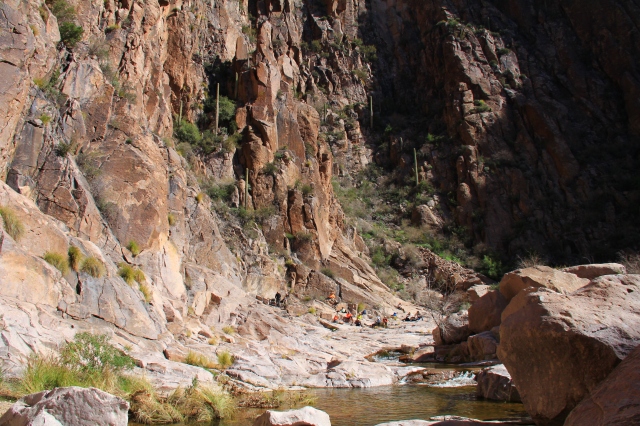 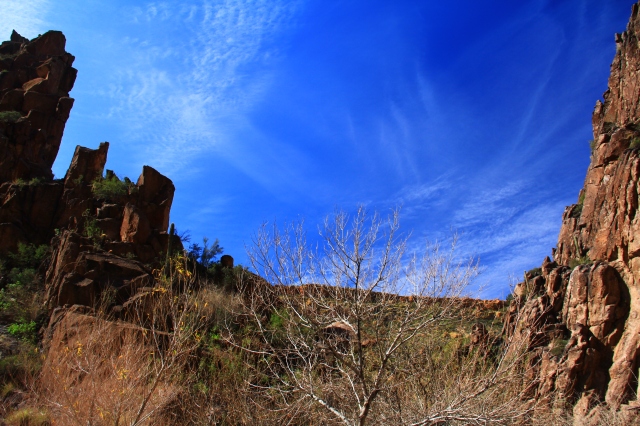 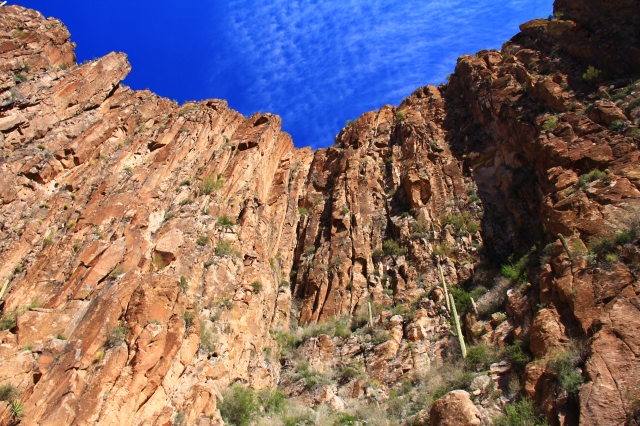 Like Loading...
This entry was posted in Arizona hiking and tagged second water spring. Bookmark the permalink.