If you’re driving toward Superior on US60 it is hard to ignore the sight of Picket Post mountain as it looms on on the south side of the road.  It’s a very dramatic mountain, rising a couple thousand feet out of the valley floor.

The club usually schedules at least one hike to the summit each year, and the 800-mile Arizona Trail skirts the western side of the mountain on its’ way from Mexico to Utah, so the trailhead is a common destination for our club.

(I’ve inserted smaller photos in this post to shorten load time, but you can click on any of them for a larger view.)

But today we weren’t here to climb the summit, or follow any established trail (at least not for very long), but rather to circle the mountain via a route cobbled together from a segment of the Arizona Trail, an old Jeep road, bushwacking through one canyon, following cattle trails through a second canyon, and eventually returning to the Picketpost trailhead via a short section of the Arizona Trail. 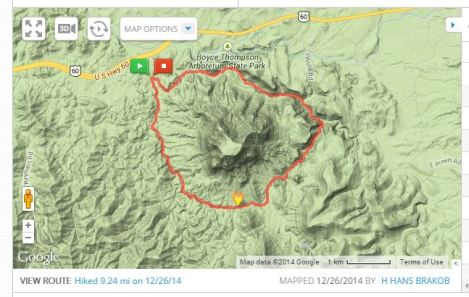 The total route ended up being 9.24 miles by my GPS reckoning, but a very “doable” hike.  (Yes, it’s a bit long, but no tough climbing or scary cliff lines to negotiate.)

It was a cool morning.  My truck thermometer at the trail head tells why everyone was in jackets and gloves at the start.

The few miles were a gradual climb, with total elevation gain of around 500 feet.  Under a friendly sun, by the time this grade was topped, most of the jackets and gloves were in our backpacks.  This was on the western and southern sides of the mountain in open “rolling” terrain.  The dominant view was of the mountain.

The highest point in the route was about directly south of the mountain.  From there the next couple miles were a slow descent in open country to the southeast corner of the mountain.  Easy walking on a jeep trail.

Southeast of the mountain we headed northeast into Telegraph Canyon. Being an old Navy Radioman, I listened closely for Morse Code, but hearing none I have no clue why the canyon is so named.

This is a fairly narrow canyon with only a sketchy trail.  Scenic, with a small stream in the bottom.  In a couple of spots we had to work our way higher on the canyon wall to clear obstacles — those are the two “up blips” you see in the elevation profile above.

In the scene below you see Tony suggesting a path through one boulder field. 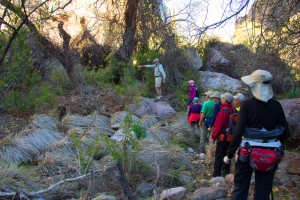 Here a couple more scenes from this rocky passage.

Telegraph Canyon is a side canyon which eventually drains into Arnett Canyon which runs WNW along the north side of Pickpost Mountain.

Arnett Canyon is a wider canyon, older than Telegraph Canyon, and has a “soil” (vs “rocky”) floor.  This supports a completely different vegetation set.  While Telegraph was populated primarily by cactus and mesquite, in Arnett Canyon the cottonwood tree was the most noticeable resident.

This canyon is shows a lot of evidence of use by cattle, and with good reason.  There is ample water, and good vegetation.

Arnett Canyon opens up near the end, and then drains into Queen Creek.  Just before that junction we left the canyon and cut cross-country back to Picketpost Trailhead.

After not hiking for a couple of weeks, this was a great hike — a tad long but not strenuous, and with great scenery all along the route.